Important information for Chausson owners.
For all Chausson motorhomes whose body manufacturer warranty expires between March 2020 and July 2020, Chausson are extending the warranty by 3 months. This extension is automatic and will be taken into account in the warranty processing.

There will also be some flexibility in the rules governing when annual Habitation servicing must take place, in order to maintain your vehicle warranty.

If you need any further clarification of this information please feel free to contact one of the team here at TC Motorhomes, email: sales@tcmotorhomes.com.

To All Of Our Motorhoming Friends

Nothing matters more to us than the health and wellbeing of our customers, our colleagues and their families.

For this reason, with immediate effect we have made the decision to temporarily close our showrooms and service departments until further notice in response to the Coronavirus pandemic.

We know this may cause some disappointment and apologise for any inconvenience. Our priority is to protect the welfare of our employees and customers and with the latest guidance from the government, we must honour this and do everything we can to protect our community and to reduce the further spread of the virus.

We are in the process of contacting customers with `current` bookings directly, and working out amicable solutions relating to return / handover of vehicles. All other future bookings are being cancelled and we will be in contact to re-arrange your booking for when our showrooms re-open.

Although our showrooms will be closed from now, you can still visit our website and enquire online should you have an interest in a vehicle, or a question about any aspect of Motorhome Sales or Servicing .. ( sales@tcmotorhomes.com )

We will also continue to support customers who wish to purchase Motorhomes, including applying for finance and having their vehicles delivered, all without having to leave your home.

Please continue to stay safe, take care of your families and together we will get through this.

From everyone at T C Motorhomes

Giving the growing threat from the Coronavirus (COVID-19) we are advising you what actions we have taken to ensure the safety and well-being or our staff and customers.

Following the Government’s guidelines, we have implemented a number of actions, which are specifically aimed at safeguarding our staff and customers health, whilst ensuring our business maintains operations and continues to provide a 'business as usual approach' for all our customers.

To monitor and advise on the Coronavirus in line with the Government and Public Health England advice.

To keep our staff briefed regarding new operating procedures aimed at protecting our staff, customers, and the business.

Advise staff who develop symptoms to stay home and self-Isolate

Increase cleaning in the showroom and workshop areas.

Deployment of anti-bacterial hand sanitisers and hand wipes in our washrooms.

We are still operating our normal opening hours, should you require a test drive or viewing from home or would like to discuss arrangements for your vehicle Servicing and MOT testing we'd be happy to accommodate you through prior arrangement. Please telephone or email us to discuss your requirements.

We would like to assure you that our Management and Directors are taking the Coronavirus Extremely seriously and are doing our best to protect our staff, customers and our business.

Thank you for your continued support of T C Motorhomes.

A statement by the Chancellor, Rishi Sunak, in today’s Budget confirmed that the rise in Vehicle Excise Duty (VED), which was imposed on new motorhomes, is to be reversed.

The tax increase of up to 705% had been levied from 1 September 2019 on newly registered motorhomes fitted with the new generation, greener, more energy efficient engines.

The trade association for the leisure vehicle industry, the National Caravan Council (NCC), immediately began its #fairmotorhometax campaign. By March 2020, the campaigning was backed by 85 cross-party MPs.

NCC Director General, John Lally, said: “We have had extraordinary support from Parliamentarians – too many to mention them all - but in particular Richard Holden MP, Sir David Amess MP, Emma Hardy MP, Karl Turner MP and David Davis MP. Rishi Sunak MP – prior to becoming Chancellor - had also indicated support.

“Alongside the NCC, its members and the wider industry, these MPs worked tirelessly to reverse this increase, knowing the impact it would have on British manufacturing, on jobs and, potentially, on UK tourism. We offer our thanks to all of them and to the media, who highlighted how unfair the tax was.

“Early in 2019 when the rise was first mooted, the NCC immediately mobilized its forces. For nearly a year, NCC Deputy Director General Alicia Dunne and the team have highlighted the issue, met with Treasury, briefed dozens of MPs, researched possible impacts and liaised with the industry to try to get the rise reversed.  Today, we have got the result we have been working for – a huge boost for British manufacturing.

“Leisure vehicle manufacturing is a British success story. The steady growth the motorhome industry had seen up to the time of the tax hike was almost instantly halted. We are delighted that our new Chancellor has so quickly understood that motorhomes and campervans should not be taxed as cars, that he has shown concern about the threats to our industry and taken this action to preserve jobs.

“Motorhomes will now return to being taxed as vans, which is logical as the vast majority are based on a commercial vehicle chassis. This is an amazing result for us, for this vibrant manufacturing industry and for the many thousands who take motorhoming holidays – the vast majority in the UK – each year.”

Erwin Hymer Group UK Ltd, Managing Director, Rob Quine, commented: “Ours is a highly innovative, inventive and competitive industry, but these tax hikes threatened its stability. I would like to thank the NCC and our new MP, Richard Holden, for all they did.”

James Turner Managing Director, Swift Group Ltd said: “This is an incredibly important result for our industry, it will without doubt resonate with our loyal customers, which in turn will give all businesses within the entire supply chain the opportunity and the confidence they need. Our gratitude extends to all those involved for their support, with special thanks to the NCC and our local MP David Davis.” 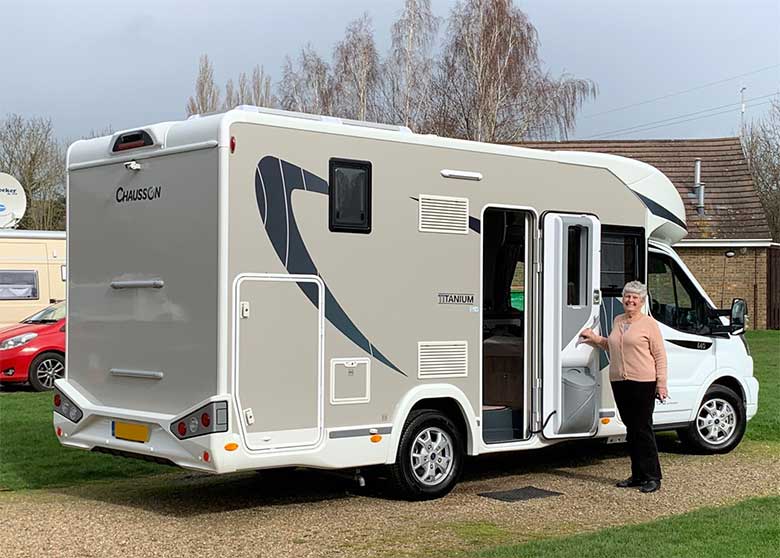 Mary and Rodger recently purchsed a Chausson 640 from us, they are already planning an adventure and were so  happy they sent this kind message.

"Just a quick thank you for your help with the purchase of our 640. All of the team that we met were friendly, knowledgable and most helpful especially Dave.

The flowers are lovely and much appreciated.

As you see, we are starting to make good use of the van and hopefully off for a short break in Normandy at the end of the month. 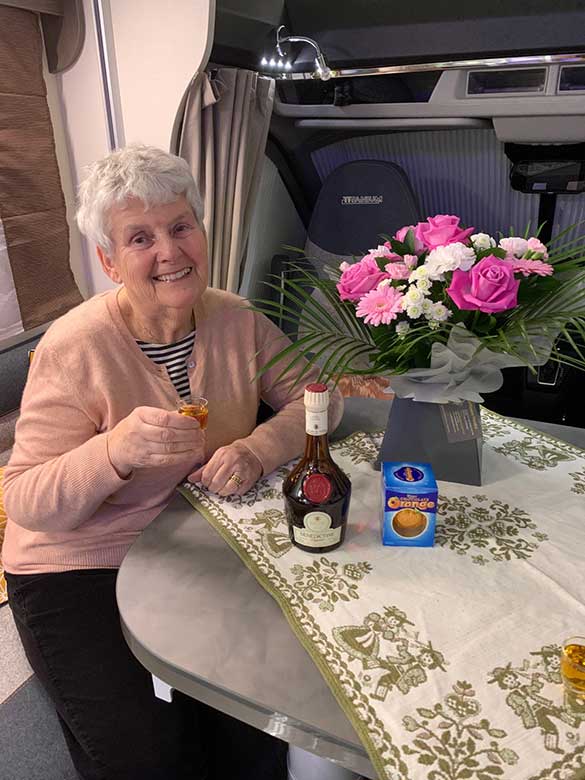 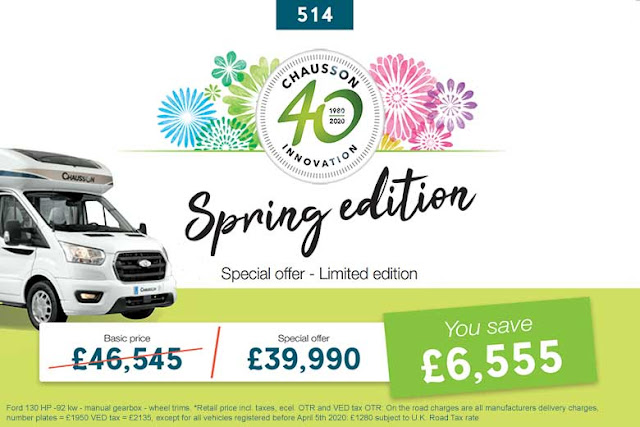 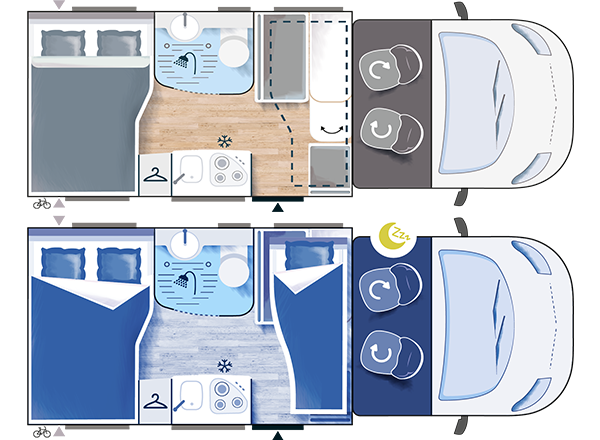 If you would like to know more or to view this model then please feel free to contact our showroom on Tel: 01227 289111

Learn about the difference between Titanium VIP and Titanium Premium!